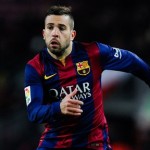 Reports are out claiming that Jordi Alba is convinced Barcelona are returning to their best form.

Defeat to Real Sociedad in their first match back after the winter break was followed by rumours of Lionel Messi’s unhappiness and coach Luis Enrique’s inability to get to grips with his side.

However, since then Barca have won eight matches in succession in league and cup.

“After that defeat the team found the game we wanted,” the left-back told a press conference.

“Luis Enrique requires you to be on top of your game all the time and you learn a lot from him about the game.”