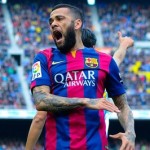 Reports are out claiming that Barcelona defender Jordi Alba refused to blame Dani Alves for his role in Malaga’s winner yesterday.

Juanmi scored the only goal of the game after just seven minutes following a glaring mistake by Dani Alves.

Alba said: “We lose as a team. The play with Alves was just one of those things. That’s it.

“Dani’s handling it like a true professional. The same thing happened to mi at Anoeta. It happens to everyone.

“We’re still confident. We’re not going to use it as an excuse going into the match with Manchester City.”

Robinho Reveals He “Always Wanted To Play For Barcelona”