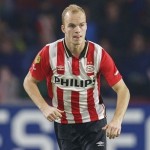 PSV are aiming to do the double on United after winning in Eindhoven earlier this season.

“United is the home favourite. We have nothing to lose and so we’ll go on full attack and look to win, but a point is a bonus,” said Hendrix.

PSV go to United on the back of poor draw with Willem II.

“It’s happened before and then we’ve played great in Europe. If you know us, you know this can happen.”