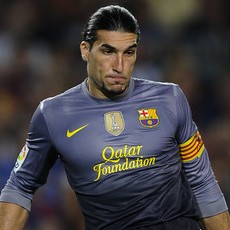 It has been reported that Barcelona goalkeeper Jose Manuel Pinto has signed a new deal.

Pinto, the long-term back-up to Victor Valdes, has agreed a new deal until June 30 2014 and will put pen to paper “over the next few weeks”, the club confirmed on official website fcbarcelona.com.

The 37-year-old joined Barca on loan from Celta Vigo in 2008 before agreeing a permanent deal the following season.