Jose Mourinho insists insists that Chelsea are not favourites for the Premier League title. 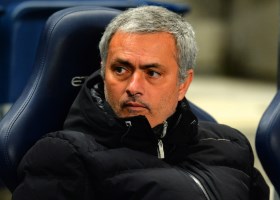 The Portuguese tactician continues to play down Chelsea’s chances, sticking to the line that his team, unlike Arsenal, are a work in progress.

He told the Daily Mail: “If you are talking about the team that looks really solid, the team that defends well but at the same time creates a lot — that is my team.

“But when I say we’re not the top candidate everyone thinks, ‘Here he is again, with what you like to call the mind games’. But it’s just my feeling.

“The matches I have lost were matches we should have won. They were the easy ones to win. The match against Everton was so easy to win but we couldn’t score a goal out of I don’t know how many chances. But we conceded and we lost.

“We are a team that if we had that last “click”, that click is to put the ball in the net, then I would say to you that we are favourites. Our team is going in a very good direction but at this moment I would not say we are favourites, but we are candidates.”