Chelsea boss Jose Mourinho has admitted that he did not say a word at halftime of their 3-1 win over Fulham. 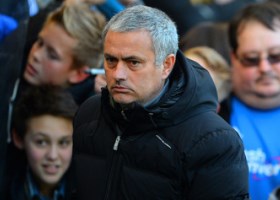 Andre Schurrle hit a hat-trick to see off rivals Fulham at Craven Cottage.

“The first half was really bad for us: I don’t know if they controlled us, or if we didn’t start. It was a really bad first half.

“It was silent [at half-time]. Normally I give them two or three minutes to clean or change boots or shirts. After that they know I’ll start talking.

“They were there ready for me but I was not ready for them. I decided not to speak because, if I started to speak about the first half, I’d need more than the 10 minutes of half-time.”

Mourinho, who admitted he could not recall another time in his managerial career when he has deployed such a tactic, praised the response from his side as they furthered their lead at the head of the table.

“I decided not to speak, they showed they were very intelligent,” he said.

“Without words, they understand – especially if you know the person – what goes in their minds, so they knew the first half was really poor and they transformed it into a fantastic second half. I haven’t had many first halves like this one – it was very bad.”