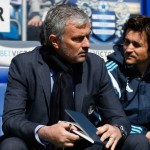 Reports are out claiming that Jose Mourinho admits Chelsea had luck on their side in their narrow 1-0 win over QPR on Sunday.

The Blues reclaimed their seven-point lead over the rest of the Premier League courtesy of Cesc Fabregas’ 88th-minute goal at Loftus Road which keeps them in pole position with seven fixtures remaining.

Fabregas’ effort was Chelsea’s only shot on target while the R’s conjured a few, namely Matt Phillips’ close range attempt in the second half which was brilliantly kept out by Thibaut Courtois.

After the match, Mourinho said: “Were we fortunate? Yes. It was a typical game for 0-0.

“We controlled them very well and kept them far from the box because in the box (Bobby) Zamora and (Charlie) Austin are killers.

“They closed us down very well, they were very well-organised defensively and gave us a difficult match.

“I am obviously very happy with my team because we kept good emotional control, we never lost balance or were under pressure.

“We were always very stable and then we scored in the crucial moment of the game – I feel sorry for them because they fought hard to get a point.” Ronaldo Thinks He “Knows it All” – Mourinho