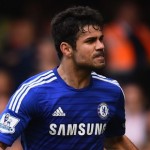 Even though Costa has suffered with hamstring issues and spent a night in hospital, Mourinho hopes he can line up against Louis van Gaal’s side.

He said: “Diego has a little chance. He’s back training individually, but not yet with us (the first team squad).

“Everything has happened to him. He was injured (hamstring) and he had to go to the hospital (before the Maribor game on Tuesday night) with a viral situation that we didn’t manage to resolve without being in the hospital over one night.