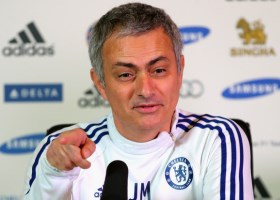 The reigning champions were beaten 3-1 by the Blues at Stamford Bridge on Sunday to fall 14 points behind league leaders Arsenal.

The defeat has United sitting in seventh spot on the table and Mourinho now suggests it will be a very tricky task for David Moyes’ outfit to rein in those teams at the top.

“Man United is Man United, mathematically it is possible, but it is hard,” Mourinho told Sky Sports.

“It is 14 for Arsenal, but also 13 for City and 12 to us, so maybe one team might collapse, but for all three teams to collapse to do that and lose so many points, I think is difficult.

“So for them I think it is the fight to finish top four which I think they can do. It is difficult, but with that pride and tradition they will fight and hopefully they win against the other contenders as we don’t play against them in the league.”

Petr Cech Fighting For His Future At Chelsea