It has been reported that Chelsea boss Jose Mourinho refuses to believe they can go through the season undefeated. 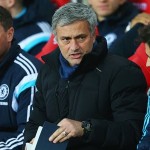 The Blues are unbeaten after 20 matches in all competitions this season, leading to suggestions of a Barclays Premier League campaign without defeat.

However the Portuguese tactician said: “One thing is that I don’t think it’s possible (to complete a season unbeaten). The other thing is that we are not playing for that.

“If you play for that, if that is one objective, maybe you draw so many matches, you don’t take risks to try and win matches. You are happy just to be undefeated.

“We are going to play matches to win. And, sometimes, we will lose.

“I’d prefer 15 points and lost matches than 10 points and being undefeated.”

Drogba : I Will Beat Rooney To Win The Golden Boot