Chelsea boss Jose Mourinho has backed his Manchester United counterpart David Moyes to be a success as the new boss at Old Trafford. 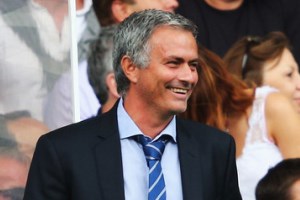 The former Inter Milan and Real Madrid boss said : “There are things that we cannot change,”.

“David has experience and he knows that he cannot change history. The history that Sir Alex did is there and it is there forever.

“Is that a problem for David? I don’t think so. I think David doesn’t want to be compared with Sir Alex.

“I hope he doesn’t win everything and he will leave something for the others, but he’s in fantastic condition.”

Mourinho enjoyed a close relationship with Sir Alex Ferguson and hopes to have a similar one with his successor.

“You have the guarantee that after the match, independent of the result, we are together again, enjoying our time and having a laugh,” he added.

“I think we can start this kind of very nice relationship I had always with Sir Alex, no problem.

“During the game, it’s a game. It’s not manager against manager. It’s club against club, it’s 11 against 11, it’s big players against big players. We just do our job normally.”