It has been reported that Chelsea boss Jose Mourinho has urged Premier League fans not to mistake Louis van Gaal’s straight-talking for arrogance. 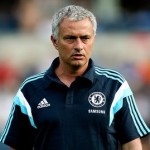 It is said that the Portuguese tactician is close to the new Manchester United manager.

He told the Mail on Sunday: “I watched him at his press conference and he was pure Van Gaal – honest and open – the way he always is.”

The two worked together for three years at Barcelona, where Mourinho was Van Gaal’s pupil and assistant.

“We got on,” said Mourinho. “Maybe we understood each other.”