It has been reported that Chelsea boss Jose Mourinho has defended Michael Essien after he gave away an early goal against Southampton on Sunday.

The Ghana international produced an errant backpass to gift Jay Rodriguez the Saints only goal inside the first 15 seconds in Chelsea’s eventual 3-1 win at Stamford Bridge. 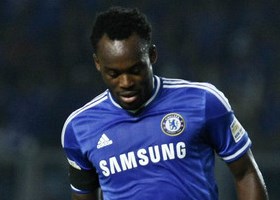 Despite the error, Mourinho did not criticise Essien too much even though he was forced to take him off at half-time after he picked up a yellow card just after the half-hour mark.

“Strikers they miss goals, goalkeepers they make mistakes, midfield players, they lose balls, especially when they try to play. And he tried to play. It was a back pass and they scored the goal.

“He had a very normal performance. He played a part in the stability the team had in the first half, but one yellow card for 45 minutes is a long time.

“I had to take one off and it was a very normal decision. Essien is Essien, he’s my man, he’s a Chelsea man and no problem, because other guys they make mistakes.”