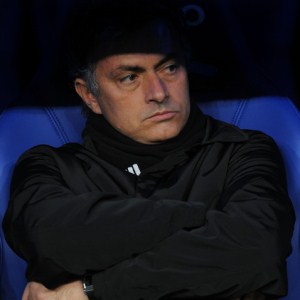 Real Madrid coach Jose Mourinho has played down a broken relationship between him and director Jorge Valdano and also declaring that he wants to see out the four years of his contract with the La Liga giants.

The former Chelsea and Inter Milan boss complained at the weekend that the club were not doing enough to support his criticism of referees he believed favoured opposing sides and Spanish media later said he and Valdano were at loggerheads over the issue.

“I can deny that the personal relationship is bad,” the flamboyant Portuguese said after Real’s 8-0 Copa del Rey thumping of Levante when asked about Valdano.

“I have no personal problems with anyone,” he added.

“That’s the most important thing.”

Valdano on his part said that the media reaction to Mourinho’s comments about referees had been exaggerated and it was “a small thing”.

The Argentine said : “We all have a certain type of personality and you have to accept that,”.

“We have a great team with a great future and a very, very competent coach and that should be enough to keep all the Madrid family happy.”

Mourinho even said that it was normal for professionals working together in a high-pressure environment to have “differences of opinion” and he welcomed criticism.

“I like criticism, whether I make it or someone else. But I repeat. Personal problems? Zero.

“That for me is fundamental because the day I have personal problems I’ll be out shortly after.”

“My intention at Real Madrid is to see out the four years of my contract.”