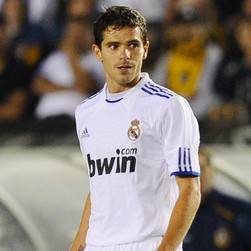 Interesting news are out from the La Liga and it has been revealed that Real Madrid coach Jose Mourinho is at loggerheads with his board over the planned sale of Fernando Gago.

It has been reported that Real Madrid are willing to sell Gago and Mahamadou Diarra in January.

It is said that while Mourinho agrees with offloading Diarra, he does not want to lose the Argentine midfielder.

The former Chelsea and Inter Milan boss sees Gago as cover in the Copa and Liga games leading up to Champions League ties.

But Real chiefs want to cash in and have already offered the midfielder to Atletico Madrid in recent days.

Sevilla have also asked about Gago leading up to the market opening on Saturday.