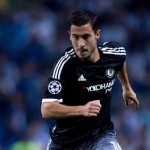 Hazard, the recipient of numerous player of the year awards last term as Chelsea won the title, began on the substitutes’ bench as Diego Costa scored one and forced an Alan Hutton own goal to ease the pressure on Mourinho and pile more on Villa boss Tim Sherwood.

“I left out Hazard because we are conceding lots of goals. We need to defend better,” Mourinho said.

“It was just a tactical decision, leaving super quality on the bench, but bringing tactical discipline and hoping that the team could be solid.

“Willian and Pedro did amazing defensive work and allowed the (central) midfield players to be very comfortable.”

Hazard will be left out until he makes the same defensive contribution as Willian and Pedro.

“I continue that way, or he comes in our direction and tries to replicate the same work that Willian and Pedro did,” Mourinho added.