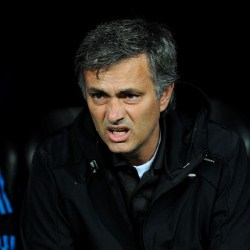 Reports have surfaced that Manchester City have Real Madrid coach Jose Mourinho under consideration should they fail to win the title this season.

The Sunday Mirror reported that Mourinho’s potential availability will lead to speculation about a potential move to Manchester City where Roberto Mancini is under pressure to land the title or face the boot.

Mourinho is City’s number one choice to replace ­Mancini if they make a change. The vacancy at the Etihad Stadium could yet convince the former ­Chelsea manager to make an unexpected and early return to English football.

“Doubts over Mourinho’s future at the Spanish giants have emerged following clashes with players and fans, plus claims that the Real hierarchy are questioning him and his tactics. ”

Mourinho is beginning to warm to the idea of taking over at City.

Previously he ruled out taking the job, seemingly waiting in the wings to land the Manchester United ­vacancy from Sir Alex ­Ferguson when he decides to retire.

But that stance has changed with Ferguson showing no signs of wishing to stand down just yet.