Chelsea boss Jose Mourinho has admitted that he is a big fan of new Manchester United manager Louis van Gaal. 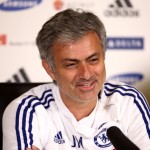 The 51 year old was impressed how Van Gaal master-minded Holland to a 5-1 win over Spain last week.

The Portuguese tactician told Yahoo: “Louis van Gaal was brilliant in the way he analysed and prepared the game against Spain.

“Spain have score one goal just with the penalty and they have zero points – and they are already packing up to go home.

“I think it’s fair to say that there is a big responsibility in Holland and in Chile.

“They did what, I think, in modern football you have to do.

“You have to be strategic. Holland and Chile they were very good by the strategic point of view, and Spain couldn’t cope with it in my opinion.”

Redknapp : Modric Is Happy At Tottenham