It has been reported that Chelsea boss Jose Mourinho was full of praise for match-winner Oscar after their narrow FA Cup win over Stoke City. 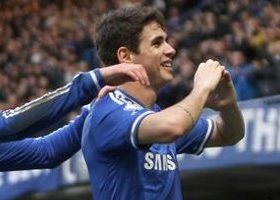 The Brazilian international’s stunning set-piece set up a mouthwatering fifth-round tie at Manchester City for the Blues, who have won the trophy in four of the last seven seasons. City beat them in last season’s semi-final.

“The free-kick obviously made us happy,” Mourinho said.

“It’s always good when you see a player that, after the normal training session, dedicates some minutes every day to train a specific thing. To score a beautiful goal was good.

“It’s a bit of a contradiction because we played so well and you win with a free-kick. When you play so well you win by scoring some amazing goals in free play.

“The 1-0 doesn’t reflect the quality of our game and the dominance of our game.

“We hit the post twice. (Stoke goalkeeper Asmir) Begovic again showed how good he is. The boys played really well.

“We controlled the game since minute one and I’m happy not just with the victory, but also the performance.”