Reports are out claiming that Jose Mourinho was delighted with how Chelsea fought for a vital win on Wednesday night. 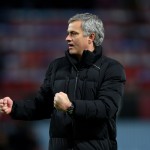 The Blues edged West Ham United 1-0 at Upton Park in the wake of their Capital One Cup win over Tottenham at Wembley on Sunday.

The Premier League leaders were not at their best against a determined Hammers line-up but managed to record the victory they were looking for to remain five points ahead of second-placed Manchester City.

“When good football is not enough, we fight, we suffer together, we cope with difficult moments,” Mourinho said after Eden Hazard’s 22nd-minute header gave his side maximum points in east London.

“It was not the best game to play after the final. The final is more than a game, because of tension, pressure and emotions.

“Some periods we had to defend with everything. It’s a game where you easily can lose two points. We had chances to kill the game. We were expecting that.

“We didn’t and when you don’t do that against West Ham you are in permanent danger. The way West Ham play, nobody is better than them.

“These three points are massive for us.”