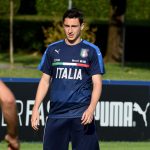 It has been revealed that Juventus are moving for Manchester United fullback Matteo Darmian.

Tuttosport says the defender, who only arrived in a £12m deal from Torino last July, is attracting the interest of Serie A champions Juventus.

The 26-year-old is part of Antonio Conte’s 23-man squad for Euro 2016, with Italy drawn in Group E alongside Belgium, Sweden and Republic of Ireland.

Jose Mourinho pushing Darmian towards the exit door will be among his first acts at Old Trafford, it is claimed. Ander Herrera Determined To Fight For His Place At Man Utd

Rooney : Manchester City Didn’t Know What To Do