It has been reported that Jose Mourinho insists he is content with the strikers he has at his disposal in the Chelsea squad. 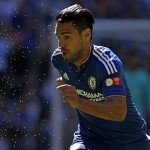 Diego Costa pulled out of Sunday’s Community Shield clash with Arsenal leaving the Blues to start with Loic Remy who was replaced at half-time of the eventual 1-0 loss by Radamel Falcao.

Neither Remy or Falcao really impressed at Wembley but Mourinho knows it is very early to fret about the condition of the French and Colombian attackers who are likely to be second and third choice behind Costa.

“He trained normally on Friday and yesterday at the end of the training session he said he was not feeling good.

“But Falcao will have had a bit more football, he will play against Fiorentina (on Wednesday) from the start. We have (Loic) Remy too, so if we don’t have Diego I am happy with the strikers I have.”

Chelsea On The Brink Of Signing Anzhi Striker Samuel Eto’o