Reports are out claiming that Jose Mourinho is confident of his Chelsea side’s Premiership chances this season. 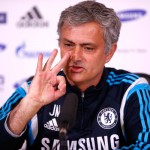 The Blues moved six points clear of second-placed Manchester City with a 1-1 draw against Southampton at Stamford Bridge on Sunday.

Diego Costa’s 11th-minute opener preceded Dusan Tadic’s penalty in the 19th minute to give the Blues a single point which edged them further ahead of reigning premiers City who lost 1-0 to Burnley on Saturday.

When assessing Chelsea’s title hopes, Mourinho suggested the west London club were sitting in a strong position with 10 fixtures remaining while the likes of City, Arsenal and Manchester United only have nine games to play.