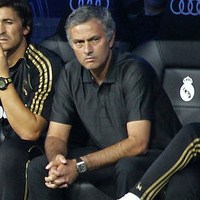 Jose Mourinho has revealed that he is delighted with the form of Real Madrid going into the season opener against Real Zaragoza.

The Special One feels that there is great improvement being shown by his team.

Mourinho said : “I feel my team is playing better than it did at this stage last year. This is important in its evolution. We’ll see what results we end because they depend on many factors. We’ll have to go slowly,”.

“We played ten games in the preseason. We did very well in eight of them, the match in Philadelphia was so-so, and our performance against Galatasaray was bad. I think we played much better this preseason than we did in last year’s. I’m sure we’ll be a better team this year.

“Coentrao will play with Alonso in midfield. He can play in practically any position. I prefer him down the wings, but he’ll have to play in midfield for the time being because we have no one else. His way of thinking is good for the club. Ozil will also be a starter, but that’s nothing new. Kaka is one of my men and he’s been working well since day one. He hasn’t missed a single training session. He’s played few official games, but he played a lot in our other matches this summer. He is a good option for me to have. He will be on the bench tomorrow. I’m happy to have a player like him by my side.

“Sahin is suffering from a new injury. It isn’t a relapse. He’s not ready to play. I don’t want to be more specific, that’s up to the medical staff, but I nevertheless didn’t expect him to be ready for this game.”