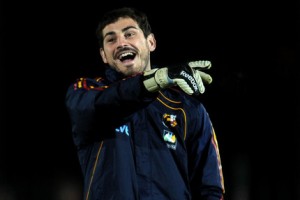 According to El Mundo Deportivo, Mourinho wants to buy a top class keeper to put pressure on his new No1.

It is believed that the former Chelsea and Inter Milan coach wants a young, but experienced, shot-stopper to drive Spanish international Casillas.

It is said that Almeria No1 Diego Alves is under consideration, though he recently signed a new contract.

Mesut Ozil Wants To End His Career With Real Madrid