Reports are out claiming that Jose Mourinho has heaped praise on Petr Cech following the goalkeeper’s departure from Chelsea. 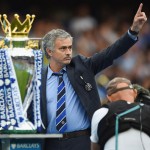 During his time in West London, Cech made almost 500 appearances and helped the Blues win 13 trophies which Mourinho insists will never be forgotten.

“Petr has been a great servant for Chelsea for 11 years and helped this club to win almost everything there is to win,” Mourinho told Chelsea’s official website of the man who was signed from French club Rennes in 2004.

“I always said I wanted him to stay but I understand Petr needed to move on to play first team football every week.

“Sometimes you have to respect the wishes of someone who has earned so much respect with his service and actions for your club. I support the owner’s decision to honour the player in this way.

“It is very rare in football to make a decision like this and for that reason I am proud of my club for making it. There are not many clubs in the world big enough to be able to make that decision.
“Petr’s success at this club will always to be remembered and we thank him for everything he did.” Arsenal To Bring Back Wojciech Szczesny From Roma Next Season