It has been reported that Jose Mourinho has hit out at his Chelsea players following their 1-1 draw with NK Maribor on Wednesday night. 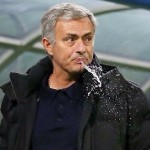 The Blues conceded early in the second half in Slovenia before Nemanja Matic spared their blushes with a 73rd minute equaliser to keep the west Londoners top of the Group G table.

Despite the fightback, Mourinho was furious with his side in the first 45 minutes and felt that they were well down on the creative flair that has seen them score 26 goals in 10 domestic matches this term.

“In the first half we didn’t play well,” Mourinho, who brought on Oscar and Diego Costa for Willian and Andre Schurrle at half-time, told Sky Sports.

“After their goal we played very well and normally we should win the game, but when you don’t play well for 90 minutes you risk, and in the last 30 minutes when we played really well, intense, and creative and with a big desire to win and had many chances to do it their goalkeeper was magnificent.

“They scored and their belief was high and the pressure on our team…the players start feeling it a little bit but as I say we created a lot of chances and the goalkeeper (Jasmin Handanovic) was really, really good.”