Reports have emerged claiming that Jose Mourinho is believed to be very keen on Burnley defender Michael Keane. 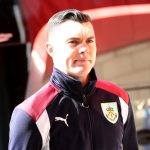 Manchester United have been loosely linked with the highly-rated centre-back in recent times but according to the Daily Mirror, their interest is serious.

It is understood that United have joined the ever-increasing queue of clubs who are lining up for the 24-year-old, who departed Old Trafford for Turf Moor three years ago.

Everton are reportedly leading the race for two-time England international Keane but the likes of Liverpool, Chelsea and Tottenham Hotspur are also in pursuit.

The Mirror report suggests that: “United are keen despite allowing the ex-trainee to leave as it is believed there were sell-on clauses in the deal with Burnley which could make it work.

“Mourinho is keen to strengthen his defence this summer and wants to sign a top centre-half.” Nani Desperate To Start Against Barcelona