It has been reported that Chelsea boss Jose Mourinho is not giving up on tempting Real Madrid defender Raphael Varane to London. 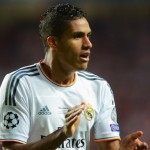 The Mirror claims that the Portuguese tactician believes Varane would be a perfect replacement for David Luiz and Chelsea representatives have made overtures to Madrid to see if they would be prepared to sell.

The Blues already have Kurt Zouma coming in from St Etienne but want to bring in another defender.

Varane would be Mourinho’s first choice while Porto’s Eliaquim Mangala – a target for Manchester City – and Roma’s Mehdi Benatia are also on their radar.