It has been reported that Chelsea boss Jose Mourinho was delighted with Eden Hazard’s performance in their draw at Manchester United. 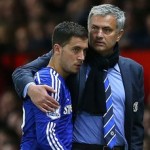 “He had initiative,” said Mourinho.

“He’s showing that in big matches – to take responsibility, to get the ball and try to create. He did it in the first half and he did it in the second. I am so happy with the kid. He’s another one who, believe me, is improving.”