It has been reported that Chelsea boss Jose Mourinho was pleased with Fernando Torres’ goalscoring contribution in victory over Crystal Palace. 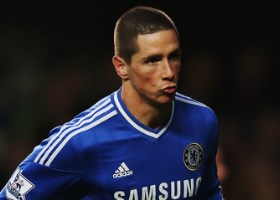 The Portuguese tactician was quick to praise Torres for his overall contribution after the Spaniard scored the opener in Saturday’s clash to make it six goals in 17 appearances in all competitions this season.

“When he has the ball on his feet with the back to the goal, he’s not a very skilful player, we know that,” Mourinho said.

“In their goal, he lost the ball when he dropped back to the midfield. He lost the ball and they made a counter-attack on that. He’s not that player.

“He was the Torres that we know, giving a hard time to the opponents. Without the ball he presses a lot and he’s not a comfortable opponent. When the team has the ball he’s the kind of guy that makes movements and tries to open space.