It has been reported that Chelsea boss Jose Mourinho is weighing up offering new terms to in-form striker Samuel Eto’o. 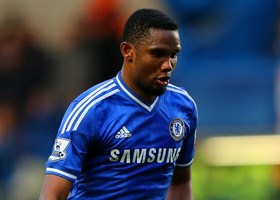 The Cameroon international, who scored a hat-trick in the recent win over Manchester United, could extend his stay at Chelsea beyond the end of this season.

Mourinho said: “He’s playing well and has a big understanding with our attacking players.

“Even if he doesn’t score 25 goals, his contribution to the team is very, very high. And we need that. We are happy (with him).”

Chelsea vs Manchester United – Who Will Win? Vote Now!