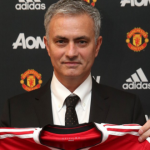 It has been reported that Jose Mourinho is willing to work with the kids at Manchester United.

The Sunday Mirror says he has promised executive vice-chairman Ed Woodward that he will bring the glory days back to Old Trafford.

And he is prepared to spend every single penny of the £200million transfer fund he will inherit to make sure that he has a team capable of challenging for the title in his first season.

Mourinho is also of the need to uphold United’s proudest traditions.

The Portuguese bristles at suggestions his teams are not capable of playing the kind of attacking football that United fans crave after two years of Van Gaal’s sterile possession-obsessed game.

And he is aware of the need to promote youth.