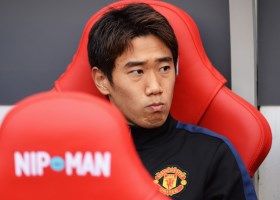 The Chelsea boss believes that the 24 year old’s dip in form at United is “only temporary” and a result of the collective struggles that the Red Devils have faced adapting to life under David Moyes.

Mourinho also admitted that he considered signing Kagawa for Real Madrid during his time in charge.

Speaking about why the move fell through, Mourinho said: “It was not being able to always play at Real Madrid.

“My first choice at the time was Mesut Ozil.

“I told him honestly without hiding it.”