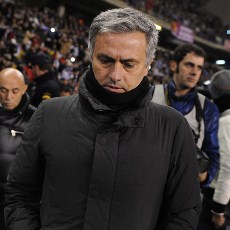 Jose Mourinho has admitted that the title race is over after Real Madrid’s draw with Espanyol.

A late goal from substitute Juan Albin gave Espanyol a share of the points and Barcelona are now 13 points clear of them in La Liga after beating second-placed Atletico Madrid 4-1 thanks to yet another double from Lionel Messi.

“It is the first time that I have been in a situation like this where my team are a long way off their objectives.

“But I don’t want to make a drama out of it, I will treat it as another stage of my life.

“There are too many points to make up at this stage. Last season, we had a 10-point lead in February and La Liga was ours.”