Jose Mourinho is believed to be keen on luring Javier Zanetti to Stamford Bridge. 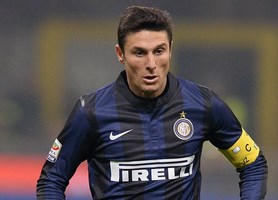 Goal.com is of the belief that the Blues boss wants the 40-year old Inter Milan legend to come to southwest London as a player when his contract at the San Siro expires this summer.

The report suggests that Mourinho wants the former Argentine international to be a part of his squad for the 2014/15 season before joining Chelsea’s backroom staff in a coaching and mentoring capacity.

Zanetti and Mourinho won the Champions League, Serie A, Coppa Italia treble together in 2009/10 and the Portuguese is keen to work with the Argentine once again.