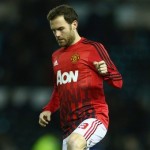 It has been reported that Jose Mourinho will insist on the sale of Juan Mata at Manchester United.

The Daily Express claims that Mata could be the first out of Old Trafford if Mourinho is appointed as manager.

The Spanish international was sold by Mourinho when he returned to Chelsea and is expected to be the first man he will ditch again if he takes on the job.

It is believed that Mourinho was unimpressed with the defensive element to Mata’s game at Chelsea.