Reports are out claiming that the agent of Jose Mourinho can see the Portuguese retiring with Chelsea. 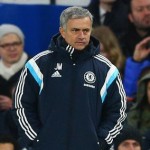 Jorge Mendes can’t see Mourinho being tempted away from Stamford Bridge – not even by Manchester United.

“Jose will stay for sure,” said Mendes to BBC Sport.

“He will be the Sir Alex Ferguson of Chelsea Football Club. He loves the supporters, he loves the city and I think he will stay there for more than 10 years.”