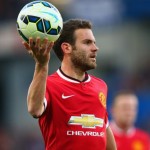 Manchester United midfielder Juan Mata has declared that they cannot afford to lose again this season after defeat at Everton.

Writing in his blog, the Spanish international stated: “As I said before, we are in the final stage of the season and we must try to win each of the remaining games.

“The goal is to get four wins in the last four games of the Premier League. We need to return all the support we got from our fans at Goodison Park – they were brilliant, once again – and we hope to do it this coming Saturday at Old Trafford against West Brom.

“We all want to be in the Champions League next season and, in order to get there, we must go back to the right path with good performances and good results. We can’t afford another game like this one.”

Nani Happy To Be Linked With Real Madrid