It has been revealed that Manchester United midfielder Juan Mata is confident that the club can challenge for the Premier League title next season under Louis van Gaal. 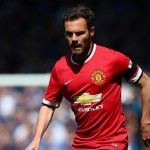 Mata failed to lift the league title in his otherwise successful spell at Chelsea and is determined to achieve success at Old Trafford under the tutelage of Dutch great van Gaal.

“I think he’s good,” Mata said. “Obviously he has a lot of experience. He has character. He has his philosophy and he follows that philosophy until the end. It’s good for the players.

“The football that he wants us to play is an attractive football and I love that football so I think it’s just a matter of time.

“I want to win it and I want to play good football with Manchester United, to show that we are still there and fighting for every title. With good football I think we can do it.

“We need to win more games. I think we have a good team. Obviously I’m sure the club will try and sign a few players to make the squad even better.

“I think we have world-class players and a very good manager so we have everything to succeed. We have to do it now and bring the club back up to where it belongs.”
/mata-man-utd-can-win-premier-league-title-under-van-gaal-4083957#sthash.sjaUNydP.dpuf