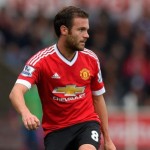 It has been reported that Juan Mata has praised the Manchester United team for their showing against Southampton on Sunday.

The Red Devils came from behind to defeat the Saints 3-2 at St Mary’s with Spanish midfielder Mata on the scoresheet alongside Anthony Martial who scored a brace.

After the match, Mata spoke to Sky Sports about the attacking brand United adopted for the contest, highlighting the 45-pass move which ended in him firing home the rebound from Martial’s effort which bounced back off the upright.

“He will be very happy with that goal, we all are,” Mata said.

“It was a fantastic bit of play from the team to keep the ball and go forward. At the end we found the space to shoot on goal – luckily it came back to me and I could finish.

“That’s the football we want to play. You cannot always play the same but at that moment we were fantastic.

“Football is about trying to get forward, trying to create chances and we did that.

“When you switch the ball from one side to the other it’s more difficult for defenders and that’s what football is all about for me.”