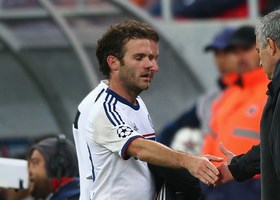 Chelsea midfielder Juan Mata has responded to a frustrating start under new boss Jose Mourinho by saying he hopes to have his best season yet at Stamford Bridge.

The former Valemcia star told Chelsea’s website: “I’m not the kind of man that gets down. I always believe in myself and train really hard. This is my way to behave, to be positive as much as I can. I have really enjoyed playing for this club in the last two seasons. I know what I can give to the team and I’m just trying to do that.” Romelu Lukaku Plays Down Mourinho Rift : I Will Return To Chelsea! Jose Mourinho Fighting For His Job At Chelsea This Week