Reports are out claiming that Manchester United midfielder Juan Mata is pleased with his preseason form. 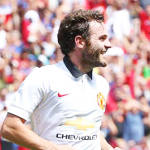 The Spanish international midfielder believes he will flourish under the tutelage of Louis van Gaal, who could make United a force to be reckoned with in the coming months.

“The manager’s new system could be very good for us,” he told ManUtd.com.

“Obviously we need to train more and improve but I think it’s very difficult for opponents when we play like this. For me personally, playing behind two strikers is a great position to help me perform at my best level.

“The first thing the manager told us in pre-season training was that the first three months of this season would be hard, because we had to change our mind-sets and understand what he was trying to do, and there was a new system as well.

“It will take time to fully adapt but, in the meantime, we are doing our best,” Juan continued.

“We’re enjoying training and the most important thing is that we are learning from him, because he is a very experienced coach.”