It has been revealed that Chelsea boss Jose Mourinho has come clean over his thoughts on frozen out Juan Mata. 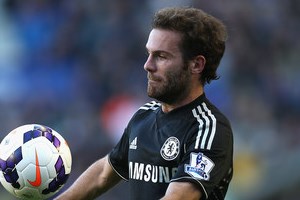 The Portuguese tactician made it clear that the Spanish international has lost the status he previously enjoyed and will have to find a new role if he is to get into his starting XI.

The Special One said: “First of all, there are things that I cannot speak of with you but I can with the players – deeply, deeply, the way I’m reading the situation and the reasons why, in this moment, he’s not playing so much, are things I can speak about with him but not you.

“But he played against Everton from the start and you can analyse his performance.

“And he played against Basel, not like Ba or Mikel coming in to rescue the game, but he came on when the team was winning 1-0 and had specific tasks to do.

“It is part of a process with him, too.

“One thing is to play with Ramires and Oscar in the side, them closing each flank, and Mata as a No10 behind a striker – clever assists and clever passes, fantastic actions because he has great talent.

“But it is another thing to adapt to the way we want to play.

“In this moment, Oscar is my No10 and, if somebody tells me that Oscar is not Chelsea’s best player since the beginning of the season, I’d have to disagree.”