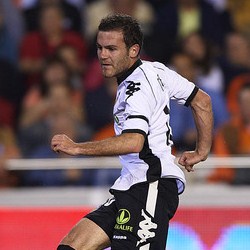 Interesting news are out and it has been revealed that Premier League giants Liverpool are closing in on Valencia wing ace Juan Mata.

Spanish reporter Guillem Balague has revealed on his website, GuillemBalague.com, that Reds boss Kenny Dalglish has made the 23 year old Spanish international a priority target for the summer market.

It is also said that Liverpool director of football Damien Comolli has visited the Mestalla to run the rule over the former Real Madrid B ace ahead of a proposed summer switch to Anfield.

Mata’s contract contains a €60million buy-out clause, but it is unlikely that Liverpool would be willing to pay that, with a €25-30million thought to be the figure needed to secure his services.