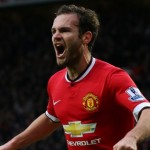 Reports are out claiming that Manchester United midfielder Juan Mata has praised the commitment of “great teammate and pro” Radamel Falcao in training.

One senior United source recently said he believed the Colombian international had a similar work ethic to Cristiano Ronaldo and that Falcao would “run through brick walls” for the club.

“He is training very well, he is waiting for his opportunity like the great professional he is, like the great team-mate he is,” United midfielder Mata said.