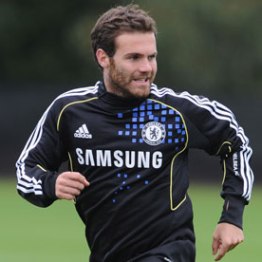 It has been revealed that Juan Mata is unlikely to start Chelsea’s Barclays Premier League game against Norwich.

However the Spanish international ace, who completed his move from Valencia on Wednesday, could be on the bench at Stamford Bridge.

Fellow new-boy Oriol Romeu is in contention to start but the game comes slightly too soon for David Luiz (thigh.

Petr Cech and Michael Essien (both knee) remain sidelined and Daniel Sturridge serves the final instalment of his three-match ban.

It Will Be Special To Play Against Real Madrid – Juan Mata

Manchester City And Chelsea To Do Battle For Neven Subotic