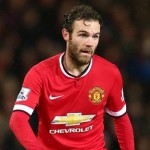 Reports are out claiming that Juan Mata felt Manchester United produced “some great football” in the first-half of their stalemate at Tottenham.

The Spanish international was at the heart of most of United’s best attacks.

“It’s a good end to the year with a good run of results,” he declared.

“It has been a long time since we lost the last game so we have to keep going, and we have to keep playing the way we played in the first half. I think it was great football. We always try to get results.”