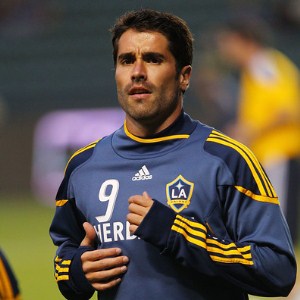 The 35 year old Colombian striker spent about four seasons in New York before moving to Los Angeles prior to the 2011 season.

The former Aston Villa striker has admitted that he is both excited and nervous about Saturday’s meeting at The Home Depot Center.

Angel told the NY Post : “It’s going to be very unique, a lot of emotions playing against the team I played with for a number of years,’’.

But as for any animosity, Angel said he will go into the match against his former teammates with an open mind and in high spirits.

“No, no; not for me, that chapter has been closed. I move on. People come and go. Whether I was happy or not happy with way they treated me, or hoping things worked out differently, there is not much I can or could do,” he added.

“You try and move on from those experiences, and try to start a new project. That’s what I’m trying to do: Move on and treasure the memories I had, the great time I spent in New York. I’ll always be grateful. I enjoyed my time there.

David Beckham Not Ready To Retire From Football