Schalke midfielder Julian Draxler is not surprised interest from the Premier League has dried up. 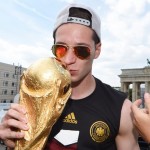 The World Cup winner with Germany is one of the hottest properties in world football and has previous attracted the attentions of Arsenal, Chelsea, Manchester United and Real Madrid.

The [buy-out clause] stayed with me,” he told Bild.

“I did not play like 20 clubs were ready to pay this sum for me last season. I have to become attractive to big clubs again.

“Now I know what it’s meant to be the bogeyman. After the derby loss to Dortmund, it felt like I was the only one who was blamed for it.”